Spinazzola out for 5-6 months

Every international tournament typically throws up some fantastic performances which mean players stand out and can even garner enough interest to earn a big move.

Italian left-back Leonardo Spinazzola was having one such tournament up until the quarter-final match with Belgian in which the Roma man fell awkwardly and was severely injured.

He was on the ground for some time before medical assistance was brought in and eventually stretchered him off the field with clearly the player in much distress.

This is set to be a huge blow to Roberto Mancini who has limited options in the position and will draught in Chelsea’s back up left-back Emerson. Emerson has been the third choice at Chelsea behind both Marcos Alonso and Ben Chilwell.

Mancini has already seen Alessandro Florenzi drop out and replaced by Giovanni Di Lorenzo of Napoli. Giorgio Chiellini came back in for the Belgium tie after missing previous fixtures, suffering an injury himself against Switzerland.

For Spinazzola though the news is damaging for his club side Roma with him now set to miss 5-6 months with a broken Achilles tendon.

Official. Italy medical staff just confirmed after today tests that Leonardo Spinazzola broke his Achilles tendon. He won’t be able to play for the next 5/6 months. 🔴🇮🇹

Spinazzola says: “I’m sure I’ll be back soon! Impossible is nothing with this team spirit”.

Emotions can run very high during games especially when you have a connection to the club or nation that you are supporting. This was indeed the case for Valerie Courtois whose brother Thibaut was in goal for the Belgian’s.

When Spinazzola went down injured, she uploaded an image to her Instagram story (shown below courtesy of Football Italia) with the caption ‘That’s what we call tricks of the trade.’, alluding to possible time-wasting from the stricken Italian.

Now knowing the severity of the injury, Valerie has written a public apology to the Roma man for her reaction during the game.

“So sorry to find out Spinazzola’s Ec finishes like this. I apologize for my reaction in the moment and I absolutely hope he has a good recovery.” 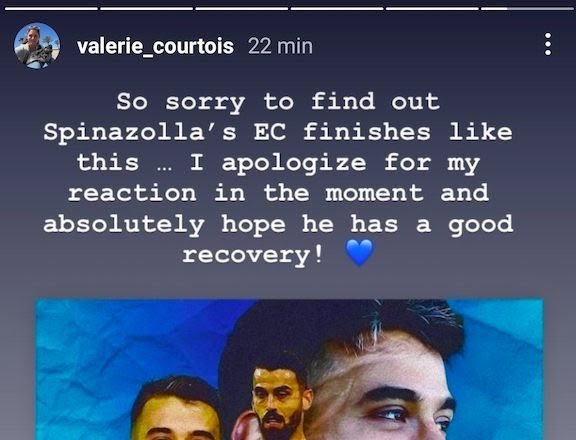 Her brother Thibaut Courtois will return to Spain with Real Madrid and aim to win back the La Liga title from rivals Atletico.

This article was edited by Ben Browning.

Manchester City star insists he will remain with club

Arsenal vs Liverpool will not be played on Christmas Eve